A Labor of Love

While in college I took a Sci-Fi / Fantasy Fiction class in which my professor loved to illuminate the symbolism in each of the tales we read. To him, Little Red Riding Hood’s cloak could not simply be red, it was a tale about a little girl’s fear of her approaching menarche. The whole point of Red’s journey was to bring sustenance from her mother to her grandmother and to hopefully avoid all the temptation of the forest. Although I could not get as excited about the sexual symbolism, what rang true for me was the idea that in fairy tales & fables, food = love. I could see how this symbolism carried over in to everyday life, how the act of creating a meal for someone else was an act of love and a desire to nourish and care for someone else.


With that said, nothing says love like homemade tamales. It was also fitting that Meghan and I would be making such a dish on the weekend in which she shared with us some fantastic news ♥ ♥ ♥ !! We started with a pork tamales recipe, but swapped out the meat for yams and kale.


After a tasty breakfast of banana french toast, we cleared the counters and started in on our day of tamale making. We decided to double the recipe so we would have plenty of goods to split even after our feast. We made the chili sauce, then the filling and masa, meanwhile soaking the husks. In retrospect we decided we might have made the filling and sauce ahead of time since we had already been cooking about 3 hours when we sat down to start assembling all the tamales.


The foundation for a good tamale is all in the spreading of the masa. You must leave enough husk to fold up and tie. There must also be enough masa to create a seal at the seam so the filling does not leak out. It wasn't until the second batch of masa that I felt I had figured out how to get the desired result.

We lined the steamers with corn husk and set our feast a-steaming, while we finished off the rest of the masa into tamales that were headed straight for the freezer. After an hour and a half of steaming we pulled them off the stove and let them rest for 7 minutes. Only then, after 6.5 hours in the kitchen was our labour of love complete and ready to serve.

Email ThisBlogThis!Share to TwitterShare to FacebookShare to Pinterest
Labels: food

Patching for the soul 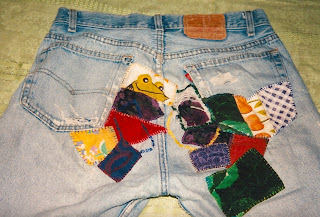 Jayme asked the other day if I knew how to patch pants. I smirked inwardly since, unbeknownst to him I used to be the queen of patched pants. Dana and I used to religiously search the Goodwill for holey 501s. They needed a patch or two right from the start, but before long they were almost more patches than pants. The patches were always functional, but it was also important that they were fashionable as well. Selecting the right thread color was almost as important as the fabric. But as I patched Jayme’s jeans, the object was just the opposite, the less visible the better.

Why do we patch, mend and darn in a culture where it is so much easier and often not much less expensive than just buying new? Frugality and environmentalism are the forerunners, but more often than not the bottom line for me is attachment. I develop some sort of emotional attachment to the item and am not ready to let it go. Which makes me realize what an art there is to repair. You want to strengthen and reinforce something that is fragile, but also beloved. If you add too much you jeopardize the emotional connection to the item –perhaps they no longer feel or look the same. But if you do not augment them enough, you are at the task again before you know it.

So I reconstructed the back cuffs, gusseted the crotch and patched a couple thinning spots of his favorite jeans and now they are back in action. I hope I have not tipped the balance with my mending since the goal here was maintaining and not adorning. Whether the art of patching is aimed at invisibility or art, the result of breathing a little more life into an object is still satisfying. It felt like one small act in fighting the good fight against the consumerism of our throw-away society. Patch-on.
Posted by Ballard Flicka at 12:03 PM 2 comments: